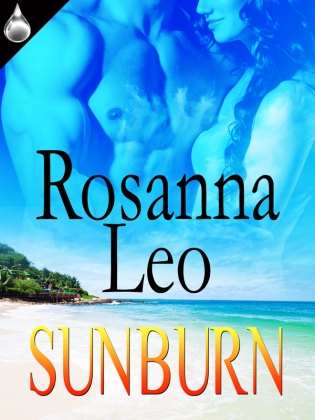 Patience O’Conner is a travel blogger who lives for her work. Her dedication to her readers brings her to the famed Helios Resort in Mexico, a locale that stuns her with its beauty but at which she suffers from some very strange accidents.
Luckily, hunky resort bartender Apollo Delos is always there in the nick of time, a malcontent guardian angel. Apollo stuns Patience again and again with his life-saving abilities, to say nothing of his smoldering looks and apparent desire to keep her alive.

Before long, Patience wonders if there is more to the sexy bartender than mixed cocktails and insane first-aid skills. Something strange is happening at Helios and Apollo doesn’t want to talk about it.

Can Patience open herself up to this enigmatic man, even though she is terrified to be vulnerable again? And can Apollo recover from an eternity of hurt and learn to trust once more? They must both decide before Death comes calling.

I’m very excited to have author Rosanna Leo here today to talk about Apollo and Patience from her book, Sunburn, which is the third book in her Greek god series. Many of you are probably familiar with Rosanna’s work since she’s written several hits, including For The Love Of A God, Sweet Hell, The Selkie, and the ARe bestseller, Up In Flames. Without further ado, here’s Apollo and Patience.

(otherwise known as the Greek god of the sun)

Physical description (in Patience’s POV): There was a man in front of them holding a tray laden with icy drinks the color of a coral sunrise. And he was even more beautiful than the drinks. Maybe six five, and he appeared as broad as he was tall. Short, blond waves. Eyes the color of blue diamonds. Lips so luscious and full. She knew women who’d pay good money to get injections that would produce lips like that.

Despite her better judgment, Patience allowed her gaze to drop. He wasn’t wearing much. Board shorts and a sleeveless T-shirt that looked as if he’d distressed it over time. The first thing that hit her was the size of his shoulders. She had to forcibly move her gaze so it wouldn’t get stuck on those massive, golden muscles. And of course, they were merely ornamentation for an already sculpted chest and arms. Hating herself for being weak, she glanced lower, taking in the line of his powerful thighs through his shorts. His calves were equally scrumptious: muscled and hard. Even his feet were perfect, clean and buffed, clad as they were in blue flip-flops that matched his shirt.

He was an altogether divine specimen.

Quote: “Okay, I know the drill. This is the part where you run away. The part where you scream in horror, rather than sit here and talk. I know how I must look to you. I’m a monstrosity. Unnatural. I terrify you. I understand what you’re thinking. I’ve done it all before, many times I assure you. So, if you’d like to get a little head start, door’s open. I won’t stand in your way, and I won’t bother you again. It’s been nice knowing you, Patience.”

Physical description (in Apollo’s POV): She was wearing a tiny bikini, barely three triangles of bright orange fabric joined by the skimpiest of strings. Her brown waves were pulled into a ponytail and trailed over one shoulder. She was wobbling again, wearing those silly heels she couldn’t walk in. Despite those heels, the picture was still making his mouth water. His gaze trailed over the soft curves of her body. Her breasts were full and luscious, practically spilling out of her bikini top. She’d crossed her arms, clearly in an effort to hide her boobs, but that only succeeded in deepening her already ample cleavage. Her hips were gorgeous and round, no sharp bones jutting out, unlike her friends’ figures. All softness. And he noticed, as his eyes fluttered, she had a sweet, little belly. Not big, but enough roundness there that her bikini bottom was cutting into it, creating a sexy pocket of womanly flesh. Light-headed, he realized it was the sort of belly he could lose himself in. The sort he loved kissing and sucking.

So help him, he’d never liked bony girls. He loved them full and buxom. This Patience took the cake on buxom.

She approached the booth, only to find the blond bartender manning it. Her eyes almost popped and she blurted, “You!”

He grinned, but there was still a tightness around his eyes, as if he were sizing her up. “Hello, Patience.” His strained expression said volumes about what he considered to be the unsuitability of her name.

She tried to ignore the sucker punch in her gut, the one that hit her as soon as his deep, velvety voice caressed her eardrums. “Aren’t you supposed to be at the bar?”

“Clearly.” She forced herself to look away from his gorgeous face, feeling light-headed because of the suns dancing in her eyes, the suns that seemed to come from him. To distract herself, she touched a few of the painted bowls on display. Not that it snuffed out those blasted suns.

He stepped closer. “Do you see anything you like?”

She choked on her saliva and coughed like a victim of the Black Death. He rushed to calm her, putting his hand on her back, massaging. She recovered upon feeling his touch and was hit by the bizarre, fleeting notion his touch made her recover. As if he’d healed her.

Utter nonsense. Yet as much as it was nonsense, her head swam with the bizarre possibility.

She stared into the man’s eyes. They were blue, so very blue. “Uh, yeah, thanks.” Curiosity got the better of her and the question poured out. “What’s your name anyway?”

He breathed in. “Apollo Delos.”

“Oh, wow,” she said, breaking into a grin. “Just like Apolo Anton Ohno! I loved him on Dancing with the Stars!”

He got a curious look and let out a strange laugh. “Yeah. Just like him.”

Sunburn is available at http://www.lsbooks.com/sunburn-p743.php