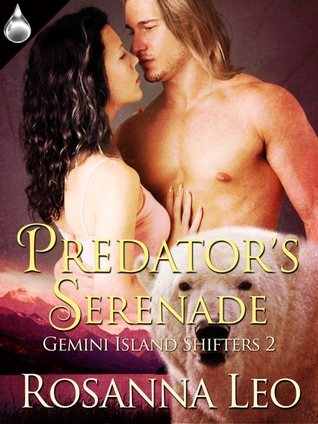 There are three things that make bear shifter Soren Snow’s skin crawl: mothers, their children, and the great outdoors. Soren is a famed musician and playboy, and he would rather spend his days pressing the flesh with the women in his fan club than developing meaningful relationships. When his brother calls in a favor, forcing Soren to revisit the Ursa Fishing Lodge in Northern Ontario, he couldn’t be more displeased. However, he owes his brother big time.

Gioia Clementine would rather not meet Soren, her drummer son’s rock idol. But when tragedy strikes her home, it seems the only one the boy might respond to is Soren. Gioia begrudgingly agrees to let her son meet him, hoping the rock star won’t turn her tween into a musical misogynist.

When Gioia and Soren meet, the sexual chemistry threatens to set the Ontario woodland ablaze. Can these two opposites find a common ground? And can they manage to resolve their unwanted feelings, even when a mysterious stranger arrives at the lodge, threatening everything?

Rosanna Leo is here to share profiles on Soren and Gioia from Predator’s Serenade, Gemini Island Shifters series (book 2). She has also included an excerpt that is sure to drive your imagination wild.

Description: (in Gioia’s words) “He was unbelievable. Nothing in her memory was quite as immense as the curves of his shoulders. On his broad and powerful chest, blond hairs tickled his pecs, leading to his washboard abs. His arms were veritable sex weapons, corded and strong, capable of imprisoning one on a mattress. Each time he hammered the drums with precision, his muscles flexed and his soft hair flew about his face. His eyes were closed, and his lips tight. Soren seemed to be completely lost in his music. Gioia fancied he must look the same way when making love. Focused. Intense. Determined to please.”

Quote: “This thing that’s happening between us? It will happen. And you’re going to love it as much as I will.”

Description: (Soren’s first impression) “No, this Gioia woman had a much quieter beauty, if he could call it that. Round hips and womanly legs, wrapped in jeans with big pink flowers all over them. A knockout rack, but it was hidden under a light sweater that covered her from wrist to neck. No cleavage showing at all, a total tragedy. She had puffy black hair curling down to her shoulders. The woman needed a bit of hair relaxer or mousse or something. Her face could be considered aesthetically pleasing, with a tiny moue of a mouth and dark eyes, but she had these huge glasses on. She looked like a little owl doll.”

Gioia followed Soren’s approach with a curious eye. She’d wondered if the miracle kisser would beat a hasty retreat after witnessing her boy fall to pieces, and yet here he was. He wore the same famished look he had right before he’d ruined her for any other man’s kiss. And she felt it too. The tingles between her shoulder blade, the gelatin knees, and trembling lips that wanted to gobble him up.

She couldn’t. She didn’t want to saddle him with such a wreck of a woman or family.

He came right up to her, so close, as if making a mockery of the space that sought to separate them. Weaving his fingers through her hair, he cradled her skull and pulled her close. Tucking her head against his chest, he kissed the top of her head, blazing a trail of hot reaction down her spine. He had new clothes on and smelled fresh and clean. As she breathed him in, he rained soft kisses all over her head.

She pulled away, suddenly terrified he’d think she was a travesty of a mother. It’s what anyone would think in his case. They’d wonder what Gioia had done wrong to create a monster child. But as she attempted to remove herself from his grasp, Soren fought her by holding her still. Again she tried jerking away from his wall of a chest. He held her firm.

When she tried two more times, each time unsuccessfully, he looked at her and shouted, “Dammit, woman, I am not letting you go, so you can stop pulling away from me!”

Something in Gioia broke. She’d been carrying her sadness around for so long, trying to be strong, and Soren was offering to be strong for her. For just a moment, maybe she could surrender. God only knew how badly she wanted to give herself to the bear man.

He grabbed her tighter, and his hands slid down to mold over her ass cheeks. His warm breath was all over her face, and she took a dizzying dive into the seas of his eyes. He ground her against him, and she was forced to stand on tip toes.

She wound her arms about his tense neck, felt him tense further. Then … a sigh somewhere in his big frame and a relaxation in his muscles. As if he needed to have her wound about him. As if it soothed him as much as her.

As he kissed her, he picked her up, his hands under her bottom. Her miniskirt rode up, and she spared a second to mentally curse her decision to wear it. And then she didn’t care.

Kissing her madly, Soren spirited her into the woods.