Out Now! Just My Type

Now you can get Just My Type, the second book the Vampire Territory series, in e-book format for your Kindle, Nook, or other e-reader or in trade paperback. https://allieritch.wordpress.com/bookstrailers/#JustMyType 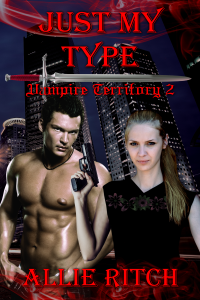 There’s trouble in vampire territory, and Melody is right in the middle of it. A new arrival from Eastern Europe named Taspar Tong is out to take over her masters’ domains using the army he has at his command. Mel is a personal assistant, not a soldier, and big male vampires scare her.

That includes Eryx, the dark-haired warrior who is always watching her and baiting her with his remarks. If only he didn’t look so sexy. Mel figures Wess Gage—their human captive—is a far safer love interest, although Wess is part of the Human Rebellion bent on exterminating all vampires. Can he really see past his prejudice, or will he turn on her?

There are two dangerous men in Mel’s life. She just has to decide which of them is her type—the one who makes her feel human again, or the vampire who makes her blood boil?

Like Loading...
This entry was posted in Blog and tagged Allie Ritch, ebook, Just My Type, paperback, vampire, Vampire Territory. Bookmark the permalink.